Do I Need to Preserve My Wrecked Car or Truck Following an Accident? 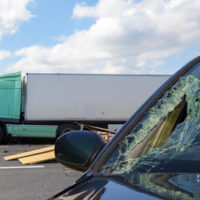 When you hire a personal injury lawyer following a car or truck accident, one of the first things they typically will do is send a letter to the person you intend to sue, requesting they preserve any potential evidence they may have related to the crash itself. Of course, as the potential plaintiff, you need to do the same thing. Failure to preserve evidence–known as “spoliation” in legal terms–can lead a judge to impose sanctions against the offending party, and in some cases dismiss a case outright.

This is precisely what happened in a recent Tennessee case involving a man and his wife who were involved in a single-vehicle tractor-trailer accident. The man was actually driving the tractor-trailer at the time. His wife was riding along as a passenger.

The man owned the tractor part of the vehicle. The trailer was owned and maintained by the defendant. On the day in question, the plaintiffs alleged, one of the axles on the trailer came loose while they were driving down the highway. The subsequent accident severely damaged both the tractor and the trailer.

Here is what happened. Shortly after the accident, the plaintiff realized his tractor was a total loss. So he signed the title to the vehicle over to his insurance company. The insurer then salvaged the vehicle for parts.

Although the plaintiffs did not intentionally try to hide or destroy evidence, the fact remained the defendant had no opportunity to examine the tractor. It therefore could not adequately present its defense. Consequently, the trial judge determined the only appropriate remedy was to dismiss the plaintiffs’ lawsuit altogether.

The Tennessee Court of Appeals upheld the trial judge’s decision. Although dismissal is a “severe sanction,” the Court noted, it is appropriate under Tennessee law when “any less severe remedy would not be sufficient to redress the prejudice caused” to the innocent party. In this case, the “prejudice” was the fact the defense could not examine the tractor for potential evidence in support of its theory of liability for the accident.

Even before speaking with a lawyer, if you have reason to suspect it may be necessary to file a personal injury lawsuit, you should make sure to preserve any piece of evidence or information that you think might be relevant. Once you retain an attorney, he or she will then advise you further on any additional steps you need to take. If you have any questions or concerns, contact Fox, Farley, Willis & Burnette, Attorneys at Law to schedule a free consultation today.