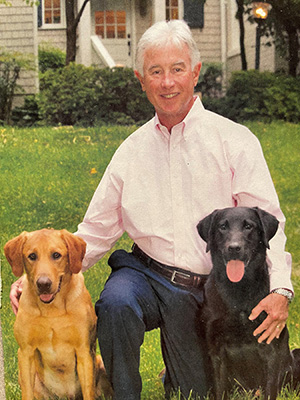 He is a current Master of the Bench of the Hamilton Burnett American Inn of Court in Knoxville. He is one of approximately 100 Tennessee lawyers selected for membership by the American Board of Trial Advocates (ABOTA). In 2011 he received the Paladin Award for East Tennessee from the Tennessee Trial Lawyers Association. The award recognizes TTLA members who achieve outstanding results for a client despite great obstacles, and who work to protect the civil justice system.

Bruce has practiced law for over forty-five years, and has tried over 125 state and federal jury trials to completion, and has tried over 400 non-jury cases as well. Most of his clients are referrals from past clients and other attorneys, and many of Bruce’s clients have sought his counsel and representation on a repeated basis over the years and decades.

Bruce grew up in Clinton, Tennessee. At home in the hills of rural East Tennessee, Bruce’s physical surroundings were humble, but he was rich in the love of his parents and family. From them, he learned the value of hard work, integrity, and fairness.
Bruce attended college and law school at the University of Tennessee. Upon graduation from the University Of Tennessee College Of Law, Bruce left to study in England, at Cambridge University. Bruce completed an advanced law degree at Cambridge, and holds a LLB in International Law.

Bruce is a past president of the Tennessee Trial Lawyers Association and serves on the Board of the Tennessee Trial Lawyers Association. In 2007 to present he was named to the Mid-South Super Lawyers. In 2008 to present, Knoxville’s Cityview Magazine named Bruce one of the Top Attorneys in the areas of workers’ compensation, nursing home neglect, auto accident, motorcycle accident, class action, personal injury and wrongful death.

In early 2008, Tennessee Governor Phil Bredesen appointed Bruce to serve as a member of Tennessee’s Workers’ Compensation Advisory Council, and Governor Bill Haslem re-appointed him in 2011. Bruce was a voting member for employees and worked in this capacity to shape legislative policy and law applicable to the rights of injured workers in Tennessee. Bruce stepped down after serving 13 years so that he could spend his time and energy focusing on Tennessee Wildlife Federation.

Bruce is current Chairman of Tennessee Wildlife Federation, a program that manages Hunters for The Hungry, they provided 750,000 pounds of venison to people in need, manages Scholastic Clay Target Program state wide and had over 2000 high school students at our State Championship, we are the tip of the spear fighting Asian Carp in the lakes and rivers in TN, we are the primary sponsor of TN Clean, legislation to cure the plastic and can contamination in the streams, lakes and roadways in TN.

Bruce is married to Mary Jane Fox and lives in Knoxville, Tennessee. He has six grown children and thirteen grandchildren. Away from work, Bruce spends time with his family, enjoys traveling, and has traveled extensively throughout Europe and Africa. He is an avid snow skier, hunter, golfer, and dotes on his beloved Labrador retrievers, Ty and Woodrow, which he runs and handles in AKC Field Trials. Bruce is the current Chairman of the Tennessee Wildlife Federation, focused on conservation, youth engagement in the outdoors, Hunter for the Hungry, and legislative policy that impacts Tennessee’s outdoor use of its land, lakes, rivers, and streams.