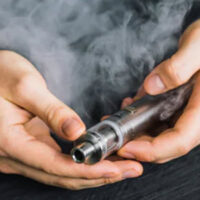 There is mounting evidence that vaping–i.e., the use of electronic cigarettes–presents a significant risk to public health. Far from providing a “safe” alternative to traditional cigarettes, vaping has been tied to a rising number of patients suffering from lung disease. This has prompted at least one state to issue a warning to the public.

On July 25, the Wisconsin Department of Health Services issued a notice to the state’s healthcare providers and local and tribal health agencies regarding “Severe Pulmonary Disease Among Adolescents who Reported Vaping.” According to the Department, there were “8 cases of severe pulmonary disease” reported in the state during the month of July 2019. The patients were primarily teenagers living in and around Milwaukee.

In each of the eight cases, the Department said the patients initially presented with “respiratory systems including cough, shortness of breath, and fatigue.” These symptoms continued to worsen over the subsequent days and weeks. Some of the patients also reported additional symptoms such as fever, anorexia, and diarrhea.

The notice said the Department was “currently investigating the possible causes of the illnesses.” However, infectious diseases were ruled out by medical testing. The Department said it was focusing on the fact that all eight patients “reported vaping in the weeks of months prior to hospital admission.” No specific vaping products were identified. But the Department nevertheless told all healthcare providers in Wisconsin to “remain alert” for additional cases of patients reporting respiratory symptoms after vaping.

On August 8, the Milwaukee Journal-Sentinel reported there was now a total of 12 confirmed cases of “lung disease tied to vaping.” Again, Wisconsin officials did not identify any specific vaping product as the culprit, citing their ongoing investigation. But the secretary-designee of the Department of Health told the Journal-Sentinel the vaping products “could include a number of substances, including nicotine, THC, synthetic cannabinoids, or a combination of these.” And not all of the patients are teenagers–some of the cases involve individuals in their 50s.

The Journal-Sentinel noted the Wisconsin investigation also now involves a number of other state and federal agencies, including the U.S. Centers for Disease Control and Prevention and the Food and Drug Administration.

While the exact cause of the Wisconsin lung disease cases may be unknown for the moment, what we do know should concern every parent of a teenager who thinks vaping is just harmless fun. The truth is there is still a lot we do not know about the long-term health effects of vaping–or what manufacturers may be concealing from the public about their products.

If you or someone in your family has developed health complications and you suspect a vaping product may be to blame, you should get in touch with an experienced Knoxville dangerous drugs attorney who can review your situation and advise you of your legal options. Contact the offices of Fox, Farley, Willis & Burnette, to schedule a free initial consultation with a member of our team today.