Who Is Responsible for an Accident Caused by a Dog? 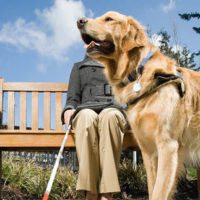 There are certain laws in Tennessee holding a dog owner liable if their animal bites or attacks a person. This means the owner may have to pay damages for a personal injury claim brought by the victim of the attack. But what about a situation where the dog indirectly causes injury? For example, what if the dog didn’t attack the victim, but the victim simply tripped over the dog? Could the owner–or some other party–be held responsible for the victim’s injuries?

A federal lawsuit now pending before a judge in Knoxville raises these exact questions. The case arises from an accident that took place at a resort in Sevierville back in August 2015. The plaintiff and her family were staying in a cabin at the resort. On the day in question, the plaintiff noticed a large dog–approximately 30 to 35 pounds–lying on the front porch of the cabin in front of the door.

Later that same day, the plaintiff tripped and fell over the dog as it continued to lie on the property. The dog did not attack the plaintiff or take any aggressive action. But following the accident, the dog “took off” and was not seen again.

The plaintiff subsequently filed a personal injury lawsuit against the resort and the dog’s owners. On August 31, 2018, U.S. District Judge H. Bruce Guyton addressed a series of defense motions for summary judgment. With respect to the resort, it claimed it could not be held liable for injuries “caused by a stray dog owned by another that merely wanders onto the premises.” Judge Guyton disagreed. According to the evidence offered by the plaintiff, the resort frequently allowed the dog to “roam on its property.” The judge said a jury could determine from this that the dog created a hazard the resort failed to remedy.

However, the judge also explained that Tennessee’s dog-bite statute does not apply to the plaintiff’s claims against the resort. This means the plaintiff does not need to show the dog had “any dangerous propensities,” as the statute requires, in order to establish the resort’s negligence. Separately, the judge rejected the dog owners’ motion for summary judgment, holding a jury could find them liable under the dog-bite statute for allowing their dog to run “at large” on a commercial property.

As you can see, a seemingly simple accident can raise complex legal questions. This is why you need to work with an experienced Sevierville personal injury lawyer if you have been injured in any kind of accident. Call the offices of Fox, Farley, Willis & Burnette, Attorneys at Law, if you need to speak with a lawyer right away.