What Is the “Open and Obvious” Defense, and How Could It Affect My Personal Injury Lawsuit? 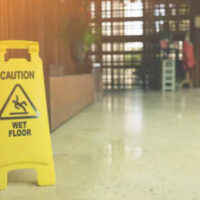 In personal injury cases dealing with premises liability, property owners will often deploy what is known as the “open and obvious” defense. Essentially, this defense states that the hazard that caused the plaintiff’s injury was so open and obvious, an average person would know to protect themselves. What actually qualifies as “open and obvious” will depend on the facts of a particular case.

And of course, just because a defendant says something is open and obvious does not make it automatically true. Take this recent ruling from a federal judge in Nashville. The judge is presiding over a premises liability case, Wall v. Wal-Mart Stores East, LP, arising from a 2017 trip-and-fall accident at a store in Clarksville.

The underlying dispute is simple enough to explain: The plaintiff tripped on a pallet containing a box of cantaloupes and fell. The defendant maintained this was an open and obvious hazard. Specifically, the defense said the plaintiff “saw the pallet as she approached the cantaloupes,” knew the pallet “had an open section at the bottom,” and knew she had to be “aware of her surroundings, and that would include where you’re putting your feet next to a pallet.”

As the defense saw things, this was an open-and-shut case. The judge, however, said things were “not so simple.” What the plaintiff actually said in her deposition testimony was that while she was “generally aware of the pallet,” her focus was on the cantaloupes. Indeed, a particular cantaloupe caught her attention, and “[w]hen she went to reach for it, her big toe got caught in the open underside of the pallet at its corner, throwing her off-balance and causing her to fall because there was nothing to grab onto.”

More to the point, the judge said the defense moved for summary judgment–i.e., to dismiss the case without a trial–because in its view, the mere presence of the pallet qualified as an open and obvious hazard under Tennessee law. But the judge said he could not find any prior Tennessee court decision requiring such a conclusion. Indeed, Tennessee Courts have in the past taken the exact opposite position–namely, that a store must “protect shoppers against the risk of harm posed by open-and-obvious conditions where it is reasonably foreseeable that customers will be distracted by the store’s merchandise and fail to notice the condition.”

Accordingly, the judge denied the motion for summary judgment. This was not a ruling on the merits of the plaintiff’s case, so the defense’s open-and-obvious argument could still prevail at trial. Additionally, the defense may also argue the plaintiff is partially at-fault for the accident and her resulting injuries.

If you are injured due to the negligence of a store or other private property owner, you need to seek out timely legal advice and representation from a Nashville personal injury lawyer with experience in complex premises liability cases. Contact Fox, Farley, Willis & Burnette, today to schedule a free consultation with a member of our personal injury team.