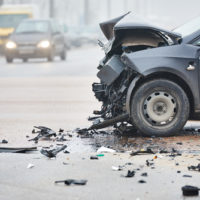 Not all multi-vehicle car accidents are the result of just two cars. Sometimes more than one driver can be at fault for your injuries. Take as an example an accident that happens when you are legally moving through an intersection and another driver makes an improper turn in front of you, causing a collision. Another driver who was following you too closely fails to react in time to the accident and hits the rear of your vehicle. You suffer neck, shoulder and back injuries. How does Tennessee law treat the liability of the other two drivers?

It used to be that the doctrine of joint and several liability applied to accidents such as this one. This allowed a plaintiff to collect all or part of damages from any of multiple defendants without consideration to their relative share of blame. But at the same time that the Tennessee Supreme Court switched from the doctrine of contributory negligence to comparative fault it also rendered joint and several liability obsolete except for a limited number of circumstances. Today in a situation such as our car accident example, if you sued both of the other drivers they would be liable to you severally, but not jointly.

Thus, if your claim went to trial and you won, the court would apportion your damages award along the following lines: