Traumatic Brain Injuries May Be Hidden, But are Serious 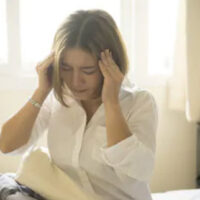 You can’t look at a scan, X-Ray or MRI and see a brain injury. A brain injury often does not cause any type of gross, bloody scene, which, as humans, tells us that an injury is severe. Brain injuries may be slow to develop. All of these things make it easy to lessen the severity of brain injuries, as compared to physical injuries. But in fact, traumatic brain injuries (TBI) are among the most severe that an accident victim can suffer.

Not Just A Symptom of a Physical Injury

Victims of TBI often have to fight against a hidden stigma—that a victim who is experiencing tiredness, anxiety, confusion, or inability to concentrate is just “depressed,” or is suffering some temporary psychological condition that will, with time, clear itself up.

Although brain injuries can improve over time, TBI are serious, and they are different from the natural anxiety or confusion that may occur from an accident. In other words, having sadness or anxiety because of a physical injury that has impacted your life is different from a TBI, where the brain itself has been injured.

How TBIs Are Sustained

Any trauma to the head can cause TBI. You don’t have to suffer a concussion (although having a concussion is a good indicator that a TBI may have been suffered, as is having “blacked out” at the accident scene). Some victims may not even recall blacking out at the scene of the accident at all.

Victims who do not black out, but who suffer dizziness, slurred speech, or headaches after an accident, may all have suffered a brain injury.

The symptoms and disabilities presented by TBI can be subtle, at least at first. The victim may even be unaware that his mood, affect, behavior, or abilities are different or reduced (ironically, the TBI itself may be giving the victim the false sense that he or she is “fine”). Often, it takes other people, like friends or family members, to testify as to the subtle changes in the victim’s behavior.

Obviously, medical documentation is also vital, which is why anybody who thinks they may have suffered a TBI, should immediately present to a doctor, and continue to go. Routine doctor visits can document any improvements (or lack thereof) in the victim’s mental condition. The doctor also may be able to administer tests to determine whether the victim’s brain is actually functioning the way that it should.

In some cases, brain functioning can be so diminished because of a TBI, that the victim may need in home care. The victim may be too forgetful to be left alone, or to perform basic household tasks. They may be more at risk to leave children or animals in cars, or to leave kitchen appliances on too long. Some TBIs can cause seizures, which can be dangerous to the victim.

Call the Clinton traumatic brain injury attorneys at Fox, Farley, Willis & Burnette, today if you have suffered any type of head injury.