Things You May Not Have Known About Amusement Park Accidents 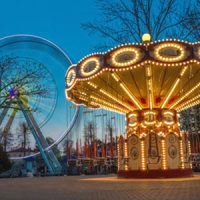 Making matters worse, many people may not even report lesser injuries at all; someone who gets whiplash, or get a finger damaged, may just deal with it so that they can have fun for the day, then they go to the doctor later, and the accident (or the defect that caused the injury) is never even reported to the park itself.

Still, there are some things that we do know about amusement parks and amusement park injuries, and some of these statistics you may find interesting.

The most dangerous amusement park is no longer in operation; it was called Action Park. In fact, HBO made a documentary about it, called Class Action Park. In a short span of just 7 years, six people died at the park.

Once again, exact statistics are hard to come by, and what we have is not very reliable. That said, as of 2019, it was estimated that there were about 1300 injuries in amusement parks that were related to the rides or attractions. That is only just under 4 injuries for every million park visitors.

Note that these statistics are only for fixed-ride parks, they do not include travelling temporary carnivals that may go from town to town.

From 1987 to 2000, there were 63 deaths at both fixed and temporary amusement parks combined.

What Kind of Injuries?

Most of the injuries, just about 28%, were whiplash-related injuries, causing injury to soft tissue in the neck and back. However a full 10% resulted in fractures and bone breaks. Appendages—arms and legs—and the face, were the areas most commonly injured.

How Are People Injured?

Half of all injuries at amusement parks were related to a fall, or by being hit by a ride, or an object falling from or off of a ride.

Many people are injured when they have pre-existing injuries. For example, people with seizures, or heart conditions who ride otherwise safe rides, may suffer serious or fatal health effects from being on rides that they should not be on, or which do not have proper safety warnings, advising them to stay off the ride.

Many amusement parks, especially temporary ones, have inflatable attractions. There were almost 2,000 injuries on these types of attractions, mostly to younger children.

Note that these are just injury statistics; they don’t tell us the cause of the injuries. In some cases, the cause can be difficult to determine, and even when it is determined by the amusement park, the parks do not always share their findings with the general public.