The Critical Difference Between Ordinary Negligence and Medical Malpractice in Tennessee 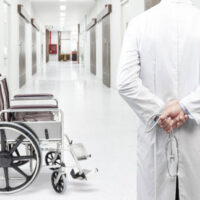 Tennessee law distinguishes between ordinary negligence and medical malpractice. For example, if you are injured in a slip-and-fall accident while walking into a hospital lobby, you could sue the hospital for ordinary negligence. But if you were injured due to a mistake made by a doctor at the hospital who was treating you, that would be medical malpractice.

But sometimes, the line between ordinary negligence and medical malpractice is not exactly clear. A recent decision from the Tennessee Court of Appeals, Johnson v. Knoxville HMA Cardiology PPM, LLC, provides a case in point. The plaintiff in this case received a pacemaker from the defendants. During a follow-up visit to reprogram the device, the plaintiff “fell off an examination table and into a wall,” apparently the result of a fainting spell. As a result of the fall, the plaintiff sustained serious neck injuries.

The plaintiff subsequently sued his doctor’s office, alleging they were negligent by failing to “provide an examination table with railings to prevent falls or any padding or protection on the walls and floor to prevent injury,” according to court records. The plaintiff categorized this as a case of ordinary negligence. The defendants replied this was actually a medical malpractice claim, which must be dismissed since the plaintiff never provided the required pre-suit notice.

A Knoxville trial court agreed with the defendants and dismissed the plaintiff’s lawsuit with prejudice, meaning he could not refile his claim. The Court of Appeals agreed that dismissal was appropriate, but said that it should be “without prejudice,” as that was the remedy mandated by the Tennessee Supreme Court in similar cases.

Regarding the substance of the dismissal, the appeals court explained the plaintiff’s injury was “related to the provision of, or failure to provide, health care services,” as defined by Tennessee law. Although the plaintiff’s complaint did not expressly state he was at the defendants’ offices to seek medical treatment, it was “the only reasonable inference” to make based on the circumstances. And even if the plaintiff’s medical examination had already ended when he fell from the exam table, that would still represent an injury “related to” health care services. In short, the Court of Appeals determined this was clearly a medical malpractice case.

Whether your case involves ordinary negligence or medical malpractice, it is important to seek timely legal advice anytime you sustain an injury that may lead to legal action. Tennessee courts are not forgiving towards injury victims who do not strictly follow state law in pursuing their claims. So if you need legal advice or representation from a qualified Knoxville personal injury lawyer, contact Fox, Farley, Willis & Burnette, today to schedule a free consultation.