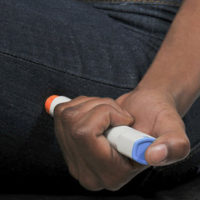 Medical device manufacturers are eager to collect billions of dollars in profits from the sale of their products. But when something goes wrong with a device, these same manufacturers can be slow to take remedial action. Even after a recall and a followup investigation by the Food and Drug Administration (FDA), a defective medical device may still be on the market and capable of injuring patients.

Meridian Failed to Act Promptly Despite “Hundreds” of Complaints

Earlier this year, Meridian Medical Technologies issued a “voluntary” recall of its popular EpiPen and EpiPen Jr. products. EpiPens automatically inject adrenaline into the body, which is used to treat cases anaphylaxis, a serious allergic reaction that can lead to death unless immediate action is taken. In its recall notice, Meridian said there was a “defective part” in more than a dozen lots of EpiPen and EpiPen Jr. devices distributed between December 2015 and July 2016. This defect prevented the device from properly functioning during a life-threatening emergency.

During February and March of this year, the FDA conducted an inspection of the company’s EpiPen manufacturing facility in Missouri. On September 5, the director of the FDA’s Kansas City district office sent Meridian a formal warning letter notifying the company of ongoing “significant violations” in its manufacturing process. Among the FDA’s key findings:

The FDA’s letter was only a warning. However, the agency reserves the right to conduct additional inspections and, if necessary, pursue legal action if Meridian fails to “correct” its violations and “prevent their recurrence.”

Standing Up to Reckless Pharmaceutical Companies in Tennessee

Cases like this illustrate just how reckless large pharmaceutical companies can be when it comes to protecting the public’s safety. Even with rigorous FDA inspections, a company like Meridian can still produce dangerous and defective medical devices that can cost patients their lives. This is why government regulation is not the only legal mechanism available to hold these companies accountable.

If you have been injured–or lost a loved one–due to a defective medical device or drug, you have the right to seek compensation through a product liability suit. The experienced Knoxville dangerous drug and defective medical device lawyers at Fox, Farley, Willis & Burnette, Attorneys at Law, have assisted many clients in obtaining compensation for their injuries and losses. Contact us today to schedule a free consultation so we can learn more about your case.