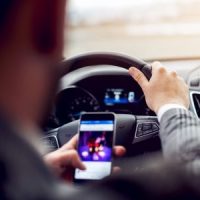 Are you distracted when you drive? You may say no, that you are careful to pay close attention to the road. But it takes less than you think to be considered a distracted driver.

It Only Takes a Moment

Have you ever just simply reached for an item while driving? That doesn’t seem like such a big deal. But research has shown that simply reaching for an item in a car can lead to an increase in the chances of getting into a car accident by 8 times. If that’s what reaching can do, imagine how much fiddling with an infotainment system, or your phone can increase the likelihood of an accident.

You may think that you look at your car’s infotainment screen very briefly; not enough to really lose track of what is happening on the road in front of you. But for a car going 55-60 miles per hour, if you just looked away for 4-5 seconds, your car would travel the length of an entire football field.

Imagine that—a pedestrian, or something in the road, or a red light, or a stop sign, would be so far away when you looked at your infotainment system, that you wouldn’t even see it when you looked down. By the time you look back up at the road, 4-5 seconds later, these things are not only visible, but they are in front of you, too close to avoid.

Even the Centers for Disease Control and Prevention have taken notice of the problem. The CDC estimates that about 1,000 people are injured every single day, simply by being distracted behind the wheel.

The problem is getting worse, largely because our cars are doing more and the systems inside of them are getting more complex. Navigating through menus and submenus, and relying on the infotainment system for vital functions like air conditioning or navigation, has made looking at screens a necessity as much as a luxury.

The problem is compounded by older people, or those who aren’t technologically savvy, who may not even know how to use the technology in their cars.

Our phones also remain a problem, despite toughening laws. Some studies have estimated that between 92-96% of people admitted to using a cell phone while driving their vehicle.

Numbers May be Smaller Than The Actual Problem

We often don’t know whether an accident was caused by distracted driving. Although a phone can be checked to see if the user was texting, there is no way to tell if a user was just looking at his or her phone. And although car systems do track infotainment system usage, most of the time, nobody checks to see if the infotainment system or touch screen was being used at the time of an accident happening.

Call the Clinton car accident lawyers at Fox Farley Willis & Burnette, PLLC, today if you have been in a car accident.