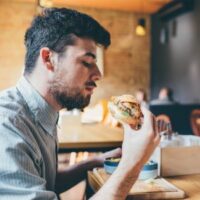 When we sit down for a meal, we expect that the only thing that will ever be in our food, is food. But sometimes that’s not the case. Sometimes, other materials or objects make it into our food, and other times, our food is just food but it may be old or expired or be contaminated in some way.

Like the seller of any product, the seller of food is strictly liable for injuries that are caused by the food that the seller sells. Actually, a number of companies that can be liable to you should you be injured by the food you eat, including the manufacturer, distributor, and the ultimate retailer.

Strict liability also means that you don’t need to prove that anybody knew or should have known that the food was “defective.” If the product you ingest is dangerous or causes you injury, parties can be liable (although you still need to prove your damages, and the extent of your damages).

There are a number of kinds of cases that involve injury or illness by ingesting food products.

The most obvious is the foreign object in the food. That can be something organic—imagine pits in olives that aren’t supposed to be there, or bones in boneless chicken. These items may not be harmful to ingest, but because we don’t expect them to be in the food we eat, we may bite down on them and break teeth or damage our jaw. Other times, especially for people with certain medical conditions like diverticulitis, ingesting these objects can be dangerous.

Sometimes we find objects in our food that shouldn’t be there at all, such as bugs, plastics, body fluids or other things that aren’t very pleasant to think about.

Our food may have nothing foreign in it at all, but may just be old, expired or damaged.

For example, listeria, which can give you a fever, vomiting or soreness in your neck, often is found in tainted processed foods like hot dogs or cheeses, but can also be found in milk.

Salmonella is often found in meat and egg products, as well as milk, and often occurs when food is not refrigerated properly. Salmonella is highly contagious from food to food, meaning that uninfected food that comes into contact with infected food, or a surface where infected food was laying, can become infected.

What To Do If You’ve Eaten Contaminated Food

If you eat a product you think caused you injury, or you think was damaged, it may be instinctive to want to throw it in the garbage. If at all possible, try to save the food you were eating, as well as any proofs of purchase such as receipts. Seal the food in a plastic bag and do your best to preserve it, and take pictures to document what was in the food, especially with foreign objects.

Call the Clinton and Knoxville personal injury attorneys at Fox, Farley, Willis & Burnette, to help if you are injured in any kind of accident.