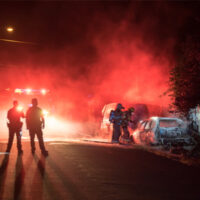 Elizabethton, TN (November 10, 2020) A woman in Washington County died in an Elizabethton crash that occurred early in the morning of November 10th. Law enforcement as well as the Elizabethton Fire Department and Carter County Rescue Squad responded to the accident, which occurred in the area of West G Street and West Elk Avenue. Only one vehicle is reported to have been involved in the accident. When law enforcement arrived at the scene of the accident, they discovered a vehicle in the grassy section located southeast of the intersection.

The driver involved in the crash is reported to have incurred fatal injuries in the crash and later passed away at the scene. A witness to the crash reported that the vehicle was headed south across the intersection and overturned while approaching the intersection. The vehicle then went airborne. It was later determined by a reconstruction team that the driver had failed to negotiate a right-hand curve as approaching West Elk Avenue Intersection. The vehicle then struck a concrete island and overturned the first time before traveling over the guardrail. The vehicle eventually came to a stop on all four tires. The driver is reported to have not been wearing a seatbelt at the time of the accident.

The National Safety Council reports that in 2019, approximately 38,800 individuals died as a result of car crashes. While this marked a 2% decrease from 2018, a tragically high number of people each year still have their lives disrupted by the loss of a loved one in a car crash.

Obtain the Services of a Compassionate Tennessee Accident Attorney

If you recently lose a loved one in a Tennessee car crash, it can be confusing to decide how to best respond and what to do to hold the responsible party accountable. One of the best steps that you can take is to promptly speak with an experienced attorney. Do not hesitate to schedule a free case evaluation with Fox, Farley, Willis & Burnette today.