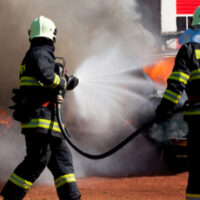 Rockwood, TN (September 15, 2020) Roane County emergency workers in hazmat suits responded to a vehicle fire on September 5th near Rockwood on East Winchester Street. Workers arrived to find a car in flames. Fortunately, no one was in the vehicle and no injuries were reported. Quick response by emergency workers kept the fire from spreading to nearby buildings. The exact cause of the fire as well as who owns the vehicle are still under investigation.

The United States Fire Administration reports that approximately 212,500 highway vehicles fires occurred throughout the country in 2018.

Motor vehicles catch on fire for various reasons, but some of the most common causes include:

If your vehicle caught on fire and another party is responsible, you can still find yourself facing substantial damages even if you were not physically injured. Fortunately, as an accident victim, you have a right to pursue compensation and a skilled attorney can help. Contact Fox, Farley, Willis & Burnette today to schedule a free case evaluation.