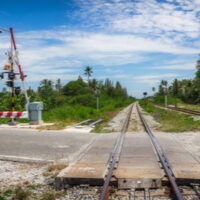 Morristown, TN (October 6, 2020) The driver of a tractor-trailer was injured on October 6th when his vehicle was struck by a train on New Line Road in Morristown close to the Fountain Plaza shopping center. Following the collision, the train pulled the truck down the tracks for several hundred feet. By the time the train came to a stop, the truck was completely wrapped around the front of the train. According to Morristown law enforcement, the driver did not hear the train approaching while crossing the railroad tracks. By the time the driver noticed the train, it was too late. Law enforcement, however, also spoke to the train’s engineers who stated they blew a horn on the train several times and could not gain the driver’s attention. As a result of his injuries, the driver was transported to Morristown-Hamblen Healthcare Systems for care. Fortunately, the driver’s injuries do not appear to be life-threatening. The driver of the tractor-trailer was also cited with a moving violation.

The Federal Railroad Administration, which is part of the United States Department of Transportation, found that in 2019, there were 2,216 collisions involving passenger vehicles and trains. These collisions resulted in 293 fatalities and 807 injuries.

When cars collide with trains, the results are often devastating. Remember though that if someone else played a role in causing your accident, you have a right to hold the party who caused your accident responsible. A skilled attorney at Fox, Farley, Willis & Burnette can help. Contact our law office today for assistance.