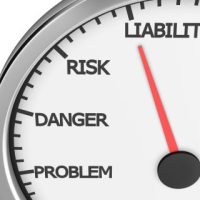 In any type of accident, including a fall on someone’s property, a Defendant can say as a defense that you are partly responsible for your own fall. That is, that you were negligent by failing to care for yourself, avoid what you fell on, or that you otherwise did or didn’t do something that contributed in full or in part to your accident.

As an example, you would have a hard time suing for damages if you simply fell over a curb. A curb is right there, in your face, and clearly visible to anybody who looks. Of course, if the curb is obstructed or hidden somehow, that may be different, but absent any type of other circumstance like that, victims couldn’t recover for open and obvious conditions.

But what about comparative negligence or comparative fault? Comparative fault says that if you as the victim are liable to some extent for your accident, you can’t recover damages for the percentage that you were responsible for.

Which One is the Law?

Courts recently have sided with the latter; that open and obvious conditions are not an absolute bar to recovering any damages.

This works in a victim’s favor. The victim now has room to recover something–even if it’s just a percentage of the total amount of damages–instead of being absolutely prohibited from collecting any damages.

For example, stores will often argue that victims should have seen spills or liquids on the floor. However, what if the store had a large display, or something else that distracted shoppers from observing what was on the floor? Now, this is something that a victim could argue, when faced with an open and obvious defense.

Of course, cases with open and obvious conditions still present problems for victims–but lately, the problems have become a bit easier to overcome.

Call the Clinton premises liability lawyers at Fox Farley Willis & Burnette, PLLC, today if you are injured at an amusement park.