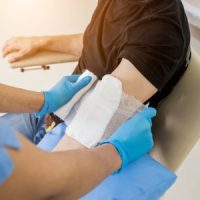 When people think of the types of injuries that they can sustain in an accident, cuts, scrapes and lacerations aren’t usually the first injuries on people’s list of concerns, in terms of injury severity. Certainly, there are some lacerations that are relatively small or minor. But not all are, and in fact, lacerations can be serious and significant injuries.

The first thing to remember is even the smallest type of laceration can become very severe, if infection sets in, particularly when infection couples with some pre-existing condition, like peripheral artery disease, which can impede the normal healing process of the body.

Another thing that many people don’t think of when it comes to lacerations is that you don’t need to come against a sharp object to suffer a laceration. Anytime skin is stretched, a laceration can happen. For example, if a finger gets wedged between surfaces in a car accident, or when a steering wheel thrusts into someone’s midsection in an accident, aside from any other type of injury, the impact can cause the skin to tear.

Skin can not only be cut, but a  laceration can cause skin to remove completely, such as in what are known as degloving injuries. Think of a situation where someone is dragged on a roadway, and the skin peels off, or when a limb is caught between two objects, or in machinery, and then the limb is pulled away.

The most immediate concern in a laceration type injury is the loss of blood, which can be severe, especially in degloving type injuries. Shock can also quickly happen in lacerations that cause severe losses of blood.

Lacerations that are quickly treated may not bleed to excess, but can still, in the long term, cause scarring, disfigurement and disability; scarred over skin is not as pliable and flexible as “normal” skin, and thus, there can be a loss of movement or use of areas where there has been scarring.

Deep lacerations don’t just cut skin, but they cut the nerve endings underneath the skin. As anybody who has had a scar knows, scars do not regrow those nerve endings, so there can be losses of sensation in scarred areas as well.

Scarring isn’t just cosmetic, but in many jobs, when looks matter, such as jobs where people’s job is evaluated on their appearances, even a small scar on an area of the body that is in the public eye, can lead to losses of promotions, career advancement or even entire careers.

Call the Knoxville personal injury lawyers at Fox Farley Willis & Burnette, PLLC, today for help if you have suffered a severe laceration, or any other type of injury, because of the carelessness of someone else.