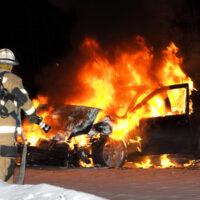 Knox County, TN (January 1, 2020) The Knox Rural Metro Fire Department responded shortly after midnight on January 1 to a multiple-vehicle fire that occurred at Gallant Road in Knox County. When crews arrived, they found four motor vehicles in the driveway home and two vehicles that were heavily damaged. The home was located close by, but the property was not damaged in the fire. Fortunately, no one was inside the residence at the time that the fire occurred. Additional details about the vehicle fire including what caused it are still under investigation, but no injuries are reported.

Burns are costly to treat and often require years to heal from, which is why if you or a loved one has been harmed by a vehicle fire caused by someone else, you should not hesitate to speak with an experienced attorney. Contact Fox, Farley, Willis & Burnette today to schedule a free case evaluation and so that our attorneys can begin fighting for the results you deserve.