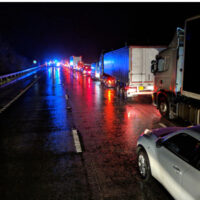 Putnam County, TN (January 13, 2021) A five vehicle chain reaction occurred on Interstate 40 in Putnam County on January 13th that sent one person to the hospital. Law enforcement reports that the driver of a 2008 Nissan Altima, the driver of a 2003 Nissan Altima, the driver of a Toyota Highlander, the driver of a tractor-trailer, and the driver of a Dodge Dakota were all involved in an accident while traveling east at the 295 mile marker. The Highlander’s driver was the only person who was hurt in the accident and was taken to the Cookeville Regional Medical Center for treatment. The driver of the 2008 Altima was charged with driving without a license. The accident occurred when the 2003 Altima driver slowed down for traffic congestion and was rear ended by the 2003 Altima driver which led to the other drivers colliding with one another.

The Insurance Information Institute has found that 2,439 car crashes in which rear-ending was the first harmful event occurred in 2018. This represents approximately 7.2% of total deadly crashes that occurred in 2018.

If you or a loved one has been injured in a Tennessee car crash caused by someone else, it is important to remember that you have the right to pursue compensation. One of the best things that you can do in such a situation is to obtain the assistance of a skilled personal injury lawyer. Contact Fox, Farley, Willis & Burnette today to schedule a free case evaluation.