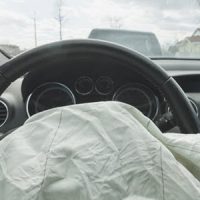 What if you knew that there was a device in your car, just inches from your head and face, that could potentially kill you? And what if you knew that the device was supposed to be there—that is, that it’s no accident that such a device is located where it is located? It may surprise you, but such an item exists. It’s your car’s airbag. The airbag is a potentially life saving device—but it can also be deadly when it malfunctions and things go wrong.

The Multiple Functions of the Airbag

Here’s the problem that airbags have to figure out. On the one hand, they have to explode, immediately, literally, within milliseconds, in order to deploy at the moment needed to prevent or minimize injury. It must do so with enough force that it can stop your head and body from moving forward in an accident.

On the other hand, to do that, the airbag has to deploy with explosive force while being just inches from your head.

When airbags work properly, they are life savers. They are ingenious devices, programmed to tell the difference between a pothole, a short stop, a bump in the road, or an actual accident. They actually both expand and then deflate quickly, which keeps you from hitting the balloon when it’s fully inflated.

When airbags don’t work properly, they can cause catastrophic damage. In fact, there are entire youtube videos that detonate airbags, and show them deploying with such force that they move heavy objects or blow heavy objects straight into the air with the force the airbags project.

Airbags can, and do, malfunction. In some cases, they can fail to detonate completely. In other cases, the airbag can deploy prematurely, or when it isn’t supposed to deploy. This can often be even more dangerous; an otherwise minor injury accident can be made worse by the unnecessary explosion of the airbag.

It isn’t just the airbag’s power that can be dangerous either—many airbags have powders in them, which can be dangerous or toxic if inhaled. Of course, in an accident, the risk of exposure is nothing compared to the good that airbags do in preventing major accidents, but in a malfunction, chemical burns can occur for no reason.

Passengers in the car also do things to cause injury to themselves. Airbags deploy assuming proper body positioning inside the car. When people shrug down in seats, or put legs up on seats or on dashboards, serious injury can result. An exploding bag can crush ankles or arm bones that are in the airbag’s way. Some have equated the power of an exploding airbag, with that of a loaded gun.

Injured by a defective airbag, or any other defect in your car? Call the Knoxville personal injury lawyers at Fox Farley Willis & Burnette, PLLC, today if you have been a victim of a defective product.