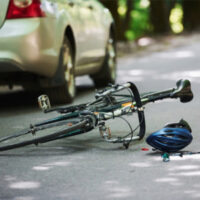 Cumberland County, TN (September 29, 2020) Cumberland County law enforcement and medics responded to the scene of a bicycle accident early on the afternoon of September 29th that occurred in the 600 block of Clint Lowe Road. At the scene, workers discovered a bicyclist had been thrown into a ditch. Later reports reveal that a motorist was traveling close behind a bicyclist who was approaching a curve. The bicyclist then ran off the road and flipped over his handlebars. The motorist stopped at the scene of the accident and called for help. The bicyclist was transported by ambulance to Brown Elementary School where an air medical helicopter landed. The bicyclist later died from his injuries. While foul play is not believed to have played a role in the accident, additional details about how the crash occurred are still pending.

The Tennessee Department of Safety and Homeland Security reports that in 2020, there were 2 injuries caused by bike accidents in Cumberland County.  This number has not changed much over the last decade. In 2011, there were also only 2 bicycle accidents that occurred in the county involving injuries. While this might make it appear as if your chances of getting injured as a bicyclist are low, it is still critical to remain cautious while biking to avoid a life-changing accident.

Because bicyclists lack the protection of passenger vehicle drivers and occupants, when bicycles are struck by cars the results are often devastating. If you or a loved one has been impacted by a car crash while you were a bicyclist, it can help to speak with an experienced attorney. Schedule a free case evaluation with Fox, Farley, Willis & Burnette today.