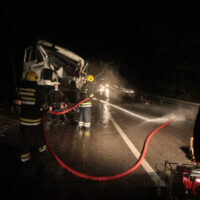 Bradley County, TN (February 24, 2021) The Tennessee Highway Patrol reports that a 79-year-old woman was killed on the afternoon of February 24th following a two vehicle crash. The accident occurred around 2:30 pm at the intersection of Highway 64 and Lyles Road Southeast. Law enforcement reports that the driver of a Volkswagen was traveling east on Highway 64 in the left lane. Meanwhile, the driver of a Mercury was pulling out from Lyles Road and collided with the Volkswagen in the left rear door area. The Mercury’s drive was pronounced dead at the scene of the accident. Meanwhile, the driver of the Volkswagen was injured and promptly transported by helicopter to a nearby medical facility. The condition of the Volkswagen driver remains uncertain. Despite the extent of the damage caused by the accident, both drivers were wearing seatbelts at the time of the collision. Additional details including the factors that led up to the crash are still under investigation.

The Insurance Institute for Highway Safety reports that in 2018 there were 33,654 deadly motor vehicle crashes that occurred in the United States.

When Tennessee vehicle collisions occur, victims are often left feeling overwhelmed and uncertain about what they can do to pursue compensation. Fortunately, an experienced accident lawyer understands how crashes occur and will remain committed to fighting for the compensation that you deserve. Do not hesitate to contact Fox, Farley, Willis & Burnette today to schedule a free case evaluation. Once retained, our lawyers will remain committed to holding the party who caused your crash accountable and fighting for the results you deserve.