Can Leaving a Blank Space on a Form Doom My Medical Malpractice Claim? 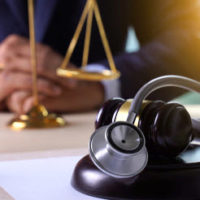 Medical malpractice cases are among the trickiest type of personal injury claims to pursue in Tennessee, largely because the law requires plaintiffs to comply with substantially more rules before a case may even be heard in court. For example, Tennessee law requires malpractice plaintiffs send a pre-suit notice to any healthcare provider who may be named as a defendant. This notice must include a “HIPAA compliant medical authorization permitting the provider receiving the notice to obtain complete medical records from each other provider being sent a notice.” HIPAA is the federal law that protects the privacy of medical records and contains exact guidelines for how to authorize disclosure.

Just how exact are these rules? A recent decision by the Tennessee Court of Appeals, Parks v. Walker, provides some answers. The plaintiff in this case received a robotic-assisted hysterectomy from the defendants in February 2015. The plaintiff said as a result of the operation, there were complications that caused her significant pain and suffering.

The trial judge agreed with the defendants and granted the motion to dismiss. A divided three-judge panel of the Court of Appeals upheld that decision. The majority pointed to HIPAA’s requirement that an authorization form must include a “description of each purpose of the requested use or disclosure.” Yet in the authorization form the plaintiff sent to the defendants, a line marked “for the purpose of” was left blank. As the majority saw it, the “plaintiff’s authorization was not complete” under HIPAA, and this meant she did not provide adequate pre-suit notice under Tennessee law, thereby requiring dismissal of her lawsuit.

One judge on the Court of Appeals disagreed. Chief Judge D. Michael Sweeney pointed out there was more to the plaintiff’s allegedly “defective” HIPAA authorization than the blank line relied upon by the defense and the majority. In fact, the plaintiff’s attorney also attached a separate letter with each form that listed all of the healthcare providers receiving pre-suit notice–and critically, included the statement, “Each provider is being sent a HIPAA-compliant medical authorization permitting each to obtain complete medical records from each other.” Judge Sweeney said he considered this constituted “substantial compliance” with HIPAA and would have reversed the trial court’s decision to dismiss the plaintiff’s complaint.

As you can see, medical malpractice cases often turn on hyper-technical interpretations of the law. This is why it is important to work with an experienced Knoxville personal injury lawyer before bringing any type of malpractice claim. Contact the offices of Fox, Farley, Willis & Burnette, Attorneys at Law, if you need advice or assistance related to any personal injury matter today.