Be Aware of Stairwell Safety 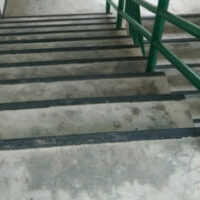 Stairways are everywhere, and many consider them to be a healthier way to go up and down, as opposed to a more sedentary elevator. And that certainly may be true from a health and fitness standpoint. But as healthy as taking the stairs can be, they also can be pretty dangerous.

The Journal of Emergency Medicine conducted a study regarding stairway injuries, and the results are pretty alarming. The study showed that about one million people every year are injured while going up and down on stairwells.

Although all ages get injured on stairs, it is the very old (who tend to suffer fractures) and very young (who tend to suffer head injuries) that tend to get injured the most often on stairwells. The report documents that there are about 38 injuries on stairs for every 10,000 residents, an amount that seems small, until you consider that it comes to about one injury every 30 seconds.

The study also looked at the causes of injuries. Some who were injured say they were simply distracted traversing stairs, and others say that they slipped or mis-stepped.

Certainly in some cases, it is our own distraction that plays a role in stairway injuries and stairway falls. But often, the design or maintenance of the stairway comes into play and contributes to the cause of the fall.

Most building codes, or simply standards of common sense safe practice, require that every step be of equal height. This is because our brains get used to stepping up or down by a certain distance. When that distance suddenly changes because one step is higher or lower than the rest, our brains and muscles aren’t prepared, and serious damage to our bodies can result.

Each stair should have a lining on the ends or edges. This avoids “blending in” when stairs are all the same color. Without a strip lining the edge of each stair, it is easy to misstep, unaware of where one step starts and the other begins.

Stairs that are outdoors need to have some type of surface that resists slippery surfaces that can result when exposed to rain, ice or snow. Even stairs that are indoors may need these kinds of protections, as people come in from outside and track water, snow, ice or mud on them.

Stair railings not only should be present, but should be at an appropriate height, and should be there for the distance that the stairs are still going—that is, the railing should not stop or end before the stairs do, something that can happen when property owners extend stairwells but don’t bother to extend the railings.

Railings should be the correct width that normal sized hands can grab them. Flat railings, or those that are too large, thick or wide, may not be safe enough.

Call the Clinton personal injury attorneys at Fox, Farley, Willis & Burnette, if you have had a slip or fall and have suffered an injury.