All About Whiplash, Sprains and Strains 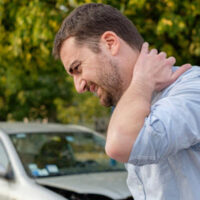 When someone is in a car accident we often think of them as having sustained a “whiplash.” That is a common term, but it’s not necessarily a medical one. Because the injury is so common it’s important to understand what it is and how it affects victims.

What is Whiplash and How Does it Happen?

Whiplash—which is actually a term that refers to a sprain or strain, as we’ll talk about below—occurs when the body goes from a resting position to a moving position very suddenly, pulling the tendons or muscles in the body. However, the head wants to remain stationary, and remains “in place.” As the body is thrust forward, and the head is “left behind,” it whips backward, damaging the internal structures of the neck.

Whiplash can also happen in sporting accidents or falls, although it’s much more common in car accidents.

Damage to the Neck Muscles

Whiplash—that is, the act of the head being forcefully thrust backwards and forwards—can result in damage to the vertebrae and the bones in the neck. However, even when these bones are unharmed, the musculature of the neck can still show damage. This is why when you go to an emergency room after you are in a car accident, the X-rays can show as normal—X-rays only show the bones, not the musculature. A positive or clean X-Ray does not mean that you do not have a whiplash injury.

When whiplash does not result in damage to the bones, it is most likely that the victim has sustained a sprain or strain type accident.

The difference between these two injuries is anatomical. With a sprain, the tissue that connects or holds together two bones is damaged. A strain is where the muscle or tissue that attaches the muscle to the bone is damaged.

With whiplash injuries, we’re usually talking about the muscles, tissue and bones in the neck, but strains and sprains can happen everywhere in the body that there is muscle or tissue.

Although there is a difference between these two injuries, there is often little difference when it comes to symptoms, treatment or recovery. The victim will often have inflammation, but the inflammation—which brings with it the pain associated with whiplash—may not be immediate (although it may be, in some cases).

Swelling, bruising, lack of ability to move and of course, pain, are all indicators that you may have sustained a sprain or strain type injury.

Sprains and strains do heal—and some heal almost completely. But others do not, or else, they heal to an extent, but never fully heal such that the victim will continually have some pain and loss of movement. The only way to tell how much your sprain or strain will heal is by going for treatment, therapy, and whatever else your doctor recommends.

Call the Clinton personal injury attorneys at Fox, Farley, Willis & Burnette, to help you if you have been injured in any way, in any kind of accident.