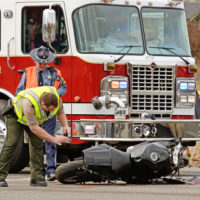 Across Tennessee and the United States, motorcycle accidents are some of the deadliest incidents on the road. In fact, according to 2013 statistics, motorcyclists were 26 times more likely to die in a crash and five times more likely to be injured than drivers and passengers in other types of vehicles. Though the number of motorcycle accidents are down from the previous year, it is still a higher rate than most people would like.

In 2013, nearly 4,700 people died in motorcycle wrecks. This is a decrease from the nearly 5,000 accidents that occurred in 2012. As such, these types of accidents account for 14 percent of all deaths on the road. In addition, nearly 90,000 riders were injured in wrecks. That makes up four percent of all traffic injuries.

Driver habits were to blame for many of the motorcycle crashes. In more than a quarter of all fatalities, the rider was legally intoxicated, and even more had at least some alcohol in their system. The problem was even worse at night, when almost half of all fatalities involved alcohol.

Other safety issues played a role in these accidents as well. Almost 35 percent of all fatalities were connected with speeding. Additionally, about 25 percent were not licensed to be driving a motorcycle at all.

One of the most important factors in preventing fatalities is wearing a helmet. It is estimated that more than 1,600 lives were saved in 2013 due to this gear. The state of Tennessee requires all riders, regardless of age, to wear a helmet any time they are on a motorcycle.

Even if riders follow all the safety guidelines, other drivers may cause them to wreck. If you have been in a motorcycle accident, it may be beneficial to contact a personal injury attorney as soon as possible.